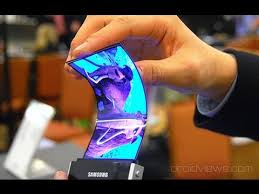 This display ca be bent, rolled, stretched and dented 12 millimeters without breaking The display will apparently measure 9.1 inches. It is said to be a proof of the idea of wearables and dashboard displays for future Samsung products. The screen can easily achieve the screen down and upward bulge. Samsung will soon start testing dual-screen prototype smartphone, the prototype is called”Galaxy X”. In other respects, the machine can be expanded at 180 degrees, two AMOLED screens are connected with a hinge. Samsung’s research and development work have been sped up, its goal is to start producing Galaxy X smartphones in the second half of 2017. Samsung has booked a number of mobile phone components, it can produce about 2000 to 3000 dual-screen devices. Samsung is trying to use the dual-screen device to test the market, collecting ideas for the future launches. But, the technology is in the early stages of research and development right now so Samsung is not sure when it will be commercialized. Although it may take a lot of time, the flexible display market, which is restricted to curved phones right now,  will evolve into foldable, rollable, bendable, and stretchable in the future. It is predicted that the global sales of the flexible display will increase to $15.7 billion in 2020 from $5.3 billion right now, with the introduction of the more advanced flexible display. Along with the stretchable display, Samsung Display will also display its glassless three-dimensional OLED in the upcoming SID conference. Samsung said its 5.09-inch display recognizes real objects in the panel which are seen according to viewer‘s position. This technology can be used for 3-D games , 3-D pop-up books, and virtual reality. Samsung Display will also reveal ultra-high-definition liquid crystal display. It can be utilized for augmented reality, virtual reality, and holograms. It is 1.96-inch display with a UHD resolution of 3840 x 2160 and a pixel density of 2250 pixel per inch. The panel that has 780,000 pixels gives a more hyper-realistic video compared to a 5-inch QHD smartphone display that has 50,000 pixels.

Samsung is being really innovative and the future looks fun! Let’s see when these ideas are commercialized.

What do you think about bendable technology? Share with us in the comments below!