Protest to Change the CGPA System in NED University 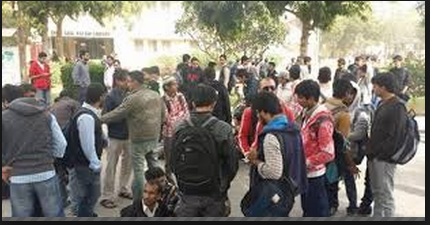 Many of you have probably heard about the protest at NEDUET regarding its GPA awarding standards. For those of you who haven’t, the whole issue was that NED University awarded grade points more strictly than other HEC-recognised institutions. This resulted in students getting lower grade points for percentages at which higher grade points would be awarded in other institutions.

Several NED students felt that their university was being too demanding of them and was putting their futures at risk by making them work extra hard to pass. At 60% marks, they were being awarded a grade point of 1.7, whereas other universities awarded 2.5. They demanded that NED University follow the grading system stipulated by HEC. This would allow some 30% of NED’s students to obtain their degree, which is not issued to those with a CGPA of less than 2.0.

After negotiations, an eventual protest and more negotiations, the university agreed to give degrees to the students who obtained a CGPA of over 2.0 after the marks conversion, but with an asterisk on their mark sheets which signified that these students had indeed passed on ‘grace marks.’ Naturally, this was unacceptable to the protesting students, and it is unclear whether they will make good on their plans to continue their protest.

I believe this protest will do little, if anything, to help students; rather, if NED agrees to the students’ demands, its academic standing will invariably suffer. Even though NED is not following the guidelines specified by the HEC (which is not just a highly substandard but also outdated and poorly managed organisation), it is this higher difficulty level in passing NED’s examinations that is the only difference between it and the other higher education institutions of Pakistan.

It is a rare case of when not following the rules is the better road to take – do NED students really want their institution to follow the same standards as those of other universities? If so (and please forgive my inner fascist here), why don’t they simply transfer to these other universities? They won’t, because NED’s reputation of being among the best engineering universities in Pakistan does not stem from its oldness or its size any more – it comes from its more stringent academic standards.

Gone are the days when NED graduates used to be prime candidates in the job market simply by virtue of their alma mater. Today, employers and universities offering Masters Programs want hard facts and figures when ascertaining the difference between NED graduates and those from other institutions, and before deciding whether an NED graduate is the best choice for them. And often enough, it is the fact that NED’s examinations are harder to pass, that a grade point of 3.5 in NED is often harder to earn than a 4.0 in the myriad other universities in Pakistan, which gives the NED graduate that edge among the competition. Isn’t this why students joined NED in the first place, gladly settling for admission in smaller departments in NED over admissions in larger ones in other universities?

And make no mistake, with its lax standards in curbing plagiarism, examination hall discipline, language skills and the often improvised and impractical nature of some of its courses, many consider academics in NED to be easier and of a poorer standard as compared to international (and some local) universities. Will removing the one academic standard NED has somehow maintained really empower its students?

Why do the protesting students think that a simple increase in their GPA (based on a technicality rather than an increase in their academic aptitude) will help them get better jobs, admissions in Masters Programs and increase the worth of their resumes? This increase does not reflect an increase in their capability, and so will hardly mean anything different to potential employers and those universities offering Masters and PhD Programs. It may sound harsh, but it was for the students to understand earlier that not working diligently and a subsequent low GPA does not bode well for them in a world of cutthroat competition. And while many will accuse me of being indifferent to the plight of those who are unable to graduate because of this system, and tell me that I would think differently had my own GPA been less than 2.0 and therefore my own degree was not being given to me, my position stands the same. The fact remains that many aspiring students were denied the seats in NED that are occupied today by the protesters, and would most certainly be willing to study harder and put more effort into returning the investment that this institution made in them.

What do you guys think about the protest?