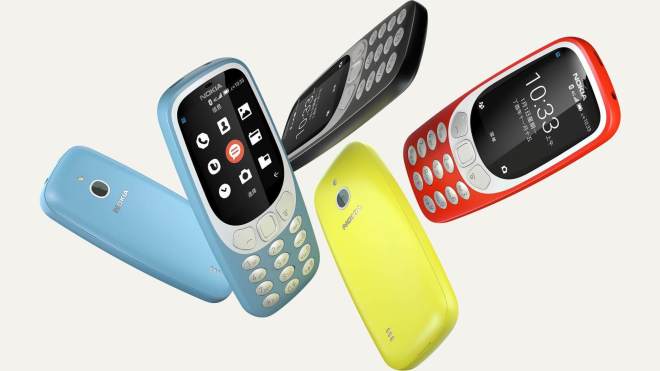 The Finnish manufacturer HMD Global has now presented the Nokia 3310 4G in China as an LTE-capable reissue of its former successful phone.After the 2G and 3G-capable versions of the Nokia 3310 (2017) now the network support contemporary version is on the market. Interestingly it has the Chinese edition of the Android derivative Yun OS.

The Nokia 3310 4G apparently does not look different at first glance and is housed in an identical case with the same dimensions. The display is again a 2.4-inch QVGA panel with 320×240 pixels resolution. Underneath are the usual hardware buttons including a D-pad. On the back sits a 2-megapixel camera, which is supported by a simple LED flash and probably just like the 3G model should deliver meager picture quality. A front camera is missing in the new device. With 1200mAh the replaceable battery is relatively generous but is identical to the power storage of the other variants of the new Nokia 3310.
Also Read: Nokia 7 Plus Spotted On Geekbench

The main difference is probably in the changed platform and network support. So here is a 1.5 gigahertz fast ARM processor previously unspecified kind used, which is combined with at least 256 megabytes of memory and 512 MB of internal flash memory. If you want, you can use an optional microSD card to expand the internal memory by up to 64 gigabytes.

The memory is partly occupied by Aliyun OS, which is also called YunOS and runs the version 5.2.0. The operating system is a version of Android developed by the online group Alibaba, which was split off in 2011, and therefore comes with its own Java-based runtime environment for apps. YunOS is primarily focused on the use of HTML5-based web applications, but also partially supports Android apps.

The Nokia 3310 4G supports 900 and 1800 MHz GSM standard networks, but also a range of UMTS and LTE bands. An FM radio receiver is also on board as well as support for Wi-Fi according to the 802.11n standard. Unlike previous versions, the Nokia 3310 4G only supports a single MicroSIM card. It will soon be available in China in blue and black at a price not yet mentioned. When and with which operating system the device also comes in the European market is not known. It would be conceivable to present a European model at Mobile World Congress 2018 towards the end of February 2018.