“My Choice”-Deepika Padukone- A review 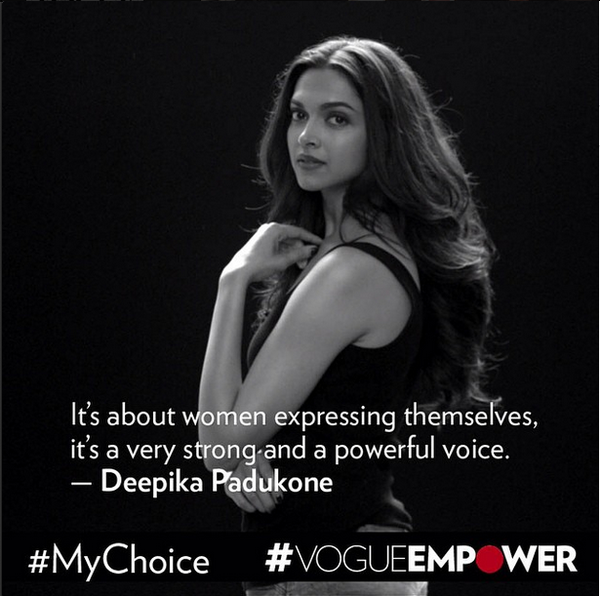 Deepika Padukone has a new video out right now, which has gone viral and is, as most viral videos do, garnering a lot of attention in the media. The video is part of the Vogue Empower series, and is directed by Homi Adajania.

Can’t blame her after the Times of India debacle to take a stand against misogynist attitudes within the Indian and global media/ social sphere. Over-sexualization of her body, she gets a lot of smack for her clothing and lifestyle choices in general but the Times of India article on her cleavage showing, is one of the examples of yellow journalism, lecherous, “oops moment” pieces that took it a step too far, forcing her to comment and urging them to separate the world of the real and reel, and not character-shaming for any lifestyle choice or fashion on-screen or off-screen, and that whatever sexual promiscuity is portrayed in the films does not necessarily reflect in her personal life. That’s a perfectly fine and reasonable sentiment to maintain. However, in reply to her “An open letter to the Times of India” (which professed these sentiments), The Times of India wrote an article telling their side of the story. It was so heavily entrenched in patriarchal misogyny that one wonders why Miss Padukone didn’t actually make this movie sooner. The problem of slut-shaming or of bullying celebrities to , or capitalizing on women’s bodies, over-sexualizing them  and then selling, because hey sex sells, has become so common across the board that campaigns like Vogue Empower need to enter the public sphere to act as a counter to the overwhelmingly patriarchal conversation about women’s bodies as sexual object, of shaming the woman for not complying with strict hetero-normative gender norms, of vilifying her for choosing a path of sexual freedom.

And this is what Miss Padukone’s latest video is about; sexual freedom. It is about a woman’s right to choose how she lives her life. It’s a good addition to the conversation on women’s empowerment, and yet it leads to some important questions. Where does the line lie between sexual freedom and overtly sexual/ sexualized behavior? How does one think of this? Is Adultery a breach of trust or a way to break free of the confines of the concept of marriage wherein sexual ownership underlines the relationship? How do we think of the sanctity of marriage? Should we? These are different times. Or do we merely stop slut-shaming those who do indulge in adultery, stop the vilification of female adulterers ( much more than their male counterparts) and accept their right to their own body? Do we stop thinking of marriage as a pact where one partner owns the other’s body, and therefore is somewhat detrimental to the exercise of sexual freedom and is derogatory in many ways, because of the mere fact that another person owns you?

We can commend Miss Padukone’s efforts to create a dialogue about empowerment, or to participate in the ongoing global debate on sexual empowerment, but this is hardly the most groundbreaking thing being said about it. And then one wonders, what kind of a conversation is Miss Padukone trying to engender? That marriage is merely oppressive; this is a point of controversy in the video. Viewers may be justified in their skepticism of this particular point; those with traditional views on marriage will definitely disagree.

However, the Bollywood star undoing her bra step is a symbol of breaking free from a sexually oppressive state of being, and the underlying sentiment is one we can empathize with, since most South Asian women, those who face the dichotomy of the modern and the traditional in the everyday because of society’s reluctance to accept change (for the better or worse) and Change’s tendency to come all too quickly. Whereas women are becoming significant contributors to the economy in India, if one is to use an example, as we see from the BBC documentary India’s Daughter especially, there is a tension between traditional gender norms that tend to pull back the Indian woman in to the private, domestic world of the home by ensuring that much of the public space is not available to her or is an area which engenders fear especially when it comes to thinking about the unfriendly bodies (as per Shilpa Phadke’s conception in her article “Unfriendly Bodies, Hostile Cities).

The video is being praised by many in the mainstream media even though it does say what feminists have been saying for a long time. However it is useful for these concepts to be reiterated and shown to an Indian public, or should I say a South Asian public where misogyny and the rigid patriarchal culture is still a problem. We saw this manifesting itself in the media conversation about Anushka Sharma, where one woman cannot even attend her boyfriend’s cricket match without being mocked because of this underlying anxiety of the South Asian male to shame or mock those women who do not pertain to regular gender norms, which requires not having a boyfriend, or not flaunting around yourself to be worthy of respect.