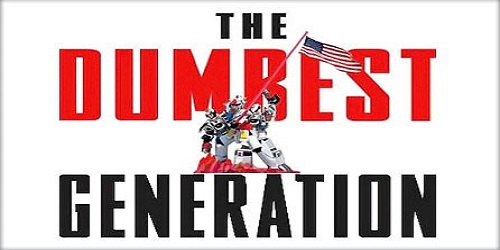 I am dumb. I am trained to be dumb and to be a part of logically paralyzed clique. I am taught to concede information, thrown at me, without even questioning it and without even processing it.  I am raised and educated in a system where accuracy of answer is more valued than quality of logic and reason. I cannot prove a simple mathematical theorem of class 9 or 10, because I’ve been taught to cram it, regardless of its thorough understanding, with a precision of nearly 100% and produce it on the exam paper sheet when required. I had just passed the exams to advance to next level, but not to feel educationally empowered for next level. I’ve studied in classrooms, not to quench the thirst for my intellectual curiosity, but to stuff my minds with most probable questions in the Five Years, Ten Years, Twenty Years (kind of booklet providing questions of previous years of exams) etc.

My father always used to quote me, “Son, categorically there are two types of educational system in this country, one to produce “Labor Class” (comprised of 99%) and other system to produce “Ruling Class”. There is no need to do some advance kind of analytical calculation to understand this fact. It is ubiquitous. It is a part of our society.

Unfortunately, we are producing MBA labors, mediocre engineers and PhD pseudo-scholars, with inherent impairment to reasoning and logic, trained to become a small part of massive convoluted corporate machinery. Recently, I came across with an article of Dr. Pervez Hoodbhoy in DAWN, More lethal than RAW, in which he contends that we are producing generations of graduates who are inept to questioning, arguing, and cognitive thinking, and unable to produce new knowledge. We rarely produce very few “Extra Bright” who came from here and there. There are flagrant means for producing this dumb generation which includes substandard textbooks, unqualified teachers and replacement of intellectual curiosity with degree and money mindedness.

How can you ensure the correctness and authenticity of textbooks, not updated from more than three decades while immense amount of new knowledge has been created? What about the scientific breakthroughs happening around the globe and fecund minds of our children are becoming fallow due to the unawareness from these new knowledge theories? How can you justify the course curriculum which is boasting the hatred among different religions? And pity on the examination system where students can suborn the invigilators for emulating the answers from the books and notes in the examination centers.

Recently Dr. Bernadette Dean, who was working on the upgrading of educational curricula in the Govt. of Sindh’s Advisory Committee, has been fled from Pakistan due to decade long threat from religious and extremist groups. Now what does this incident connotes? That if anyone attempted to engender change, reform and upgrade educational curricula, he will be in serious jeopardy. A dilemma to think about.

We’ve been taught by teachers who trained us in figuring out the right answer to question but not imparting the reason why we are figuring out the answer? Even been qualified to universities, we still suffered in the vocabulary of our basic concepts of science, mathematics and physics. Rarely, there were times in anyone’s life, when he gets inspired from the intellectual persona of few numbers of teachers. Rest of the time, we’ve found ourselves in the hands of teachers, whose sole purpose is to choke their syllabus down student’s throats irrespective of effective knowledge transfer, to belittle weak students in every class, to blackmail students on the name of attendance, and make them fawn over sessional and exams marks.

The classrooms have been converted to one way didactic medium of instruction. Students are rewarded on the correctness of answers not on the initiative to bring healthy logic and reasoning to cohort. Where are those teachers who used to hypnotize students with their intellectual persona and kind nature? Nowadays, teacher-student relationship has been limited up to the classroom only. Going back three to four decades, in the times of our parents, it had been learned that student-teacher relationship tend to start after classrooms, in the teacher’s room where face to face discussion happens, an air of intellectual openness can be felt. But very unfortunate of us, nowadays, teacher’s role has been confined to awarding grades to students only.

“Get education and start earning”, a motto we are living by in these days. Earning bread and butter is a primordial need of us as human beings. But, a shift has been observed from intellectual curiosity to money making avariciousness. Today, we are in brutal race of getting degrees to earn more and more money. Education is for enlightenment, for awareness, making us noble persons, transforming us from mere human being to “Super Specie” of planet earth.

Conversely, crescendo of customized educational degrees has been offering in market to transform us into a high class and high pay labor. Sadly, we are producing “Certified Dumb” labors at an exponential rate but where are the scholars, intellectuals, philosophers, moralists and reformers who shape the very form of our society?

To conclude my argument, I would like to quote Dr. Pervez Hoodbhoy. He opined in his article, that what we need more is not higher educational budget or higher pay for teachers or more schools and universities but a genuine challenge to figure out how to set the minds of our young generation free. To empower them with the jewels of questioning, reasoning and logical thinking, so that our upcoming generation cannot label themselves as “Logically Dumb Generation”.