iFixit Disassembles HomePod To Discover The Secrets Within

Home » Blog » iFixit Disassembles HomePod To Discover The Secrets Within 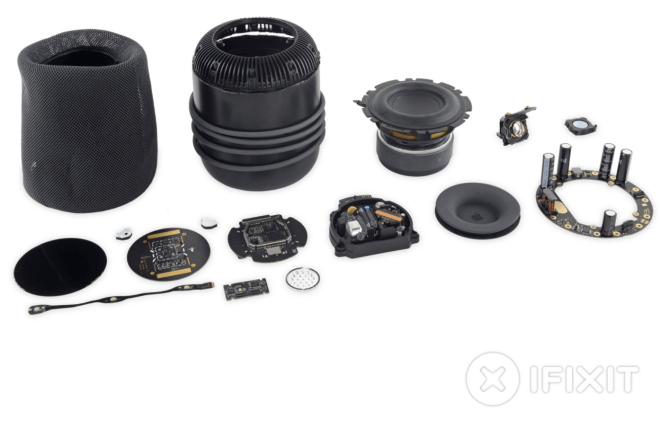 Since last Friday, the first Apple HomePods have arrived and already the repair professionals of iFixit have once again set about finding the secret of the hardware with the help of their tools on the track.

Apple’s new HomePod was unceremoniously taken apart by iFixit. The repair professionals had to work very hard to devote to take the device apart. According to the initial assessment of iFixit, the HomePod is like a tank. “Indestructibility” is the buzzword. The speaker is very solid, so a saw, a pair of scissors and all the other common cutting tools like the “Heat-Gun”, Torx screwdrivers and others had to be used to disassemble the HomePod.

Also Read: Apple HomePod Repairs Cost As Much As The Device Itself

iFixit has discovered a few interesting details. The extremely clever use of conductive screw terminals, for example, minimizes cable clutter in the interior over several component layers stacked one on top of the other, according to the repair professionals. Thus, the components can also be very close together, with which Apple saved a lot of space and helped it implement a relatively compact design.

Also Read: Apple HomePod Will Not Be Launched Any Time Soon

The assessment of the reparability of the new Apple HomePod falls due to the difficulties that the experts had to get inside. iFixit only awards one out of ten possible points this time. As is so often the case, this is due to the massive use of glue, which clearly makes it difficult to access it again and again. But also because iFixit, despite a lot of fiddling without Apple’s official repair manual has not found a non-destructive way into the interior of the speaker system. This should now also be clear why Apple requires a good 80 percent of the original price for a regular repair of the HomePod.