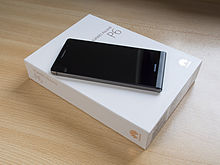 At the Chinese network equipment manufacturer Huawei, setting up their own smartphone series has proven to be a very successful concept.Over the past year, the company has reached a milestone that would have been hard to believe so soon.The success has made Huawei the third largest smartphone provider in the world.

The group has been driving a two-brand strategy for some time. Thus, devices are offered under their own name, under the brand Honor but also a slightly different target group is addressed. Shortly before the turn of the year, CEO Ken Hu had already given a brief indication of the associated successes, which has now been substantiated once again.
Also Read: Huawei P20 New Leaks

With Huawei, there is a third time for a third smartphone manufacturer, which manages to achieve a double-digit market share and in which the trend clearly continues to point up. The base is an increase in sales of 10.07 percent over the last year, the Chinese put 153 million units in total. In the third quarter, for the first time, the company achieved the market share in the double-digit range: 10.5 percent were there, while Apple came to 12.5 percent and Samsung to 22.3 percent.

Also Read: Huawei Is Preparing For The End Of The Smartphone Boom

Huawei’s continued development in the final months of the year enabled it to achieve double-digit market share for the full year as well. However, the head of the company had already pointed out that in the near future it would no longer be necessary to work only on the quantity, but also on the qualitative consolidation of this success – which means, in particular, an increase in margins.

Also Read: Huawei Enjoy 7S To Be Released As Huawei P Smart Globally
As Hu explained, Huawei also wants to focus strongly on the development of its own AI and augmented reality features in 2018. The company’s R & D spending would be concentrated in this area. This makes sense because it will hardly achieve any major differences in the hardware to the numerous other Android manufacturers and ultimately convince customers about additional software features.

Ultimately, this is also the way to be able to work ahead in the market. In particular, Samsung has to be attacked for it. And the South Koreans are not exactly blessed with a happy hand in developing their own services that could make their own devices more interesting. So if Huawei succeeds in taking their own smartphones out of the crowd with their own applications, it has a good chance of becoming a market leader.