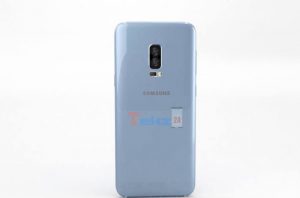 We cannot say anything for certain about the Galaxy Note FE but the leaked pictures of Samsung Galaxy Note 8 sure make up an interesting sight. The back side show the unique coral blue color. We know that the users are now a bit tired of the regular black, silver and grey and want something new. Red and blue are more popular colors these days. Along with red and blue there are two unconventional colors of yellow and orange that are also becoming hugely popular. We do not know which other colors would be available with Galaxy Note 8 but coral blue is confirmed and it looks really cool.

There is no fingerprint scanner on the design leak, which is a bit odd. But there is a vertical dual camera design. Another thing that is quite odd in the design is the position of the camera. The cameras these days are positioned at the top or at the bottom. They are always near the corner of the mobile phone so they do not disturb the screen display. However this image shows something that is quite strange and unique. But if the camera is not near the edges then how will the screen function properly? This is a question that further leaks will answer.

So we have to wait some more in order to know about the complete details of Galaxy Note 8. Are you excited about its release? Share your views about this design in the comments section below.