Apple Risks Getting Kicked Out Of The Chinese Market

Home » Blog » Apple Risks Getting Kicked Out Of The Chinese Market 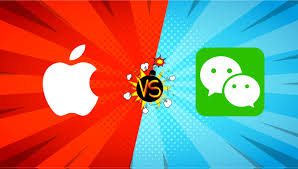 Yesterday, Apple said it has given an ultimatum: either change channels, share the reward, or get shelved. Apple wants WeChat to either pay tolls or get out. It seems that Apple does not care about the popularity of the application. There are 890 million users of WeChat. Apple wants the 30% share but it is also scared that WeChat will leave.

WeChat does not want to leave the App Store, and Apple does not want to really force away WeCha. There have been a continuous decline inApple sales in the Greater China region in the last 12 quarters. Apple wants to receive 30% of the appreciation fee to increase their income. If WeChat does not comply, Apple will not only lose the revenue it is hoping to get but will also lose a lot of users. A large number of users will give up iPhone if WeChat is pulled from the App Store. The appreciation payments are a part of WeChat. People might give up Apple because of the absence of WeChat from the App Store. A lot of media outlets have done a survey of this the Apple vs WeChat feud. Most people said they would choose WeChat over iPhone. Users can use Android for WeChat and use iPhone to play games and use other applications. Without WeChat, there will be no WeChat friends to play games. People might jut stop using iPhone altogether. In China, the use of WeChat is very popular. It’s just like using Google Maps, Skype, or Whatsapp in the United States. In China, you cannot survive without WeChat on your phone. Many people do not understand why in China you can not be separated from WeChat. The explanation starts from WeChat itself. The existence of WeChat means, first of all, to replace the telephone communication, many people initially use WeChat because it can replace messages. In particular, you can use WeChat to send voice information, make voice calls and video calls, and communicate with a family member using family micro-credit group. This means that the WeChat directly replaces the phone. You say that these users can leave the WeChat? Most people in China use WeChat to communicate, it just does not make sense for them to leave it.

Also Read: Apple In Hot Waters In China Over Disapproval Of In-App Tipping

WeChat is used for social communications and it is just indispensable. In business communication and internal communication, in addition to Ali, Netease and other enterprises with their own social and office applications, most companies will be based on WeChat exchange. After meeting with the customer, or with the other team of the company to communicate business, first of all, information is added to WeChat, to exchange information and assigns tasks. Corporate offices and operations are inseparable from the WeChat.

In daily life, it is estimated that there are a very few people who have not used WeChat payment. Even if there is no online payment through WeChat to buy goods, it is used like a wallet by many. In the 1,2 line city, some elderly people have already started using WeChat to pay. The convenience of mobile payment can be imagined, you do not have to spend much money, businesses do not have to change the zero, do not worry about a wallet that was stolen. With such a convenient life experience, it is very unlikely that users will give up on WeChat for iPhone. WeChat is used to make purchases. The payments are also made via WeChat. Even if WeChat is not used for payment, the bank card needs to be bind. Unless you are a committed user of WeChat, you will not understand its importance. In China, it does not matter if you do not have the iPhone, but it matters a lot if you do not have WeChat.

Also Read: Jia Yueting steps down as a CEO of Leshi

In this regard, foreign research institutions and the media have similar views. Recently, the market research firm Stratechery released a survey report, the agency believes that in the Chinese mobile phone market, the application is the most important, the operating system is not so important. WeChat has been everywhere, not limited to the operating system, which means consumers will not quit their favorite application because of iPhone. Foreign media have also analyzed this. “The Wall Street Journal” has reported that as the world’s largest smartphone market, Chinese consumers are not afraid to replace the iPhone. Some analysts also pointed out that Chinese consumers do not care about the operating system, they only care about whether to continue to use WeChat. For a better understanding of Chinese users, you must go through the analysis made by foreign institutions. Apple should be really careful and avoid underestimating the importance of WeChat in China.

Also Read: Chinese Tourists Can Now Use WeChat For Payments in Toronto

The Apple vs WeChat feud can be damaging for both the companies. A middle way should be worked out.