An Introduction To Magento

Home » Blog » An Introduction To Magento

Magento is an open-source e-commerce platform. It is written in PHP. The software was developed by Varien Inc., an American private company.  Volunteers also helped. It is used by various businesses and merchandisers all over the world to run their e-commerce business.

First generally available release of the software was published by Varien on March 31, 2008. A substantial share of the company was later sold to eBay. Later, eBay completely acquired the company. According Magento’s market share among the top most well known e-commerce platforms is about 29.8%.

They started development in early 2007. On August 31, 2007, the first public beta version was introduced. Varien previously worked with osCommerce. It had planned to split osCommerce but later on decided to rewrite it as Magento. In 2011, eBay announced it had made an investment in Magento the previous year, which was equal to around 49% share of the company. On June 6, 2011, eBay said that it will take over the rest of Magento, and add it to its new X.Commerce initiative.

Magento is the most popular e-commerce platform in the world. Around 250,000 merchants around the world are selling on.

Consumer behavior changes all the time. Magento gives the flexibility to customize and extend the platform to make unique, differentiated, branded experiences. You can adapt fast and stay at the top of the game.

It has more than 150,000 innovators working tirelessly to provide solutions and solve problems. This means if you ever run into a problem, there will be plenty of help, guidance, and support online.

Their marketplace is one of the world’s largest. There are many customized and tested extensions. You can extend your store’s features in any way you want.

It is not just a platform or product. Its Solution Partner Program provides you trained and certified experts to help you enter the market fast, create worthwhile customer experiences, and sell more.

According to average figures, businessmen using it grow 3 times faster than those using competitive platforms. They also experience a 50% reduction in total cost of ownership.

Magento uses the MySQL/MariaDB relational database management system (RDBMS), PHP programming language, and some elements of the Zend Framework. It operates on the principles of object-oriented programming and model–view–controller architecture. It also uses the entity–attribute–value model to save data. Apart from that, Magento 2 has launched the Model-View-ViewModel pattern to its front-end code using the JavaScript library called Knockout.js. 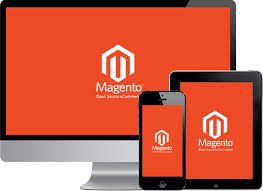 It is an open-source eCommerce platform. Developers can apply the core files and extend its functionality by adding new plug-in modules which are often provided by other developers. The current release and previously released versions are available on the Magento Commerce, Inc. website for download.

The Enterprise Edition is derivative of the Magento Community Edition and it has the same core files. It is not free, but it has more features and functionality. This version is designed for large businesses that need technical support with usage, installation, configuration, and troubleshooting. It has an annual maintenance fee, but does not include hosting. The Magento team developed Enterprise Edition by cooperating with the users and third parties.

ECE is a platform that facilitates rapid deployment of customizable, secure and scalable web store fronts, along with leading hosting and managed infrastructure. In has a full REST API and a scriptable command line interface which ensures ease of integration with outer systems and compatibility with existing workflows. It has Fastly, a real-time content delivery network that diagnoses speed problems and is able to make automated changes and also diminishes DDoS attacks. It provides a visualization of how all the pages work together, letting users eliminate redundancies.

It has a lot of new, better, and improved features, developer tools. I ts architecture is different from the previous versions.cMagento 2 consists of both frontend and backend Admin panel. The backend of Magento 2 is very intuitive and friendly. The menu is vertical. The Dashboard of backend now emphasizes more Lifetime Sales and Average Order. The frontend has some new features. The default theme is  Luma Theme. It has responsive web design and faster performance theme. The new 2-step checkout is not as complicated as the 6-step checkout of Magento 1.

In 2015, Magento 2.0 was released, to provide new ways to increased user engagement, smooth navigation, conversion rates and general revenue generation. It has business user tools to speed up build up time and increase productivity. Table locking issues have been reduced to a great extent. Page caching has also been improved. Work has also been done on guest check out procedures. Enterprise-level scalability, inbuilt snippets for structured data, file structure with simple customization, CSS preprocessing has also been made easier. The performance has also improved and the code base is better now.

Magento is used by many well-known businesses all over the world. The community feature has lots of features and it’s absolutely free. It is scaleable, so you can write new features for your problems. A lot of extensions are also available that you can add. Moreover, it has a large network of developers, which is growing. This is why it is called the most reliable and efficient platform.

What are your thoughts on this e-commerce platform? Let us know by posting comments below.